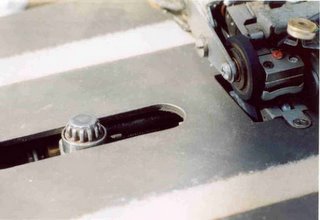 Quotes from acosutic eveidence in the Kennedy affair

On the day of the assassination the Dallas Police Department (DPD) operated two radio channels. Channel I was for normal police radio traffic and channel II was assigned for the use of the presidential motorcade. Each channel was recorded by a different device. Channel I was recorded on a Dictabelt and channel II on a Gray Audograph. Both machines worked by engraving a track into a plastic medium. The Dictabelt used a rotating cylinder and the Audograph used a flat disk, similar to a phonograph record. Both machines were transmission actuated.

An unknown motorcycle tuned to channel I had a defective microphone button that caused it to continuously transmit over a five minute period during which the assassination took place.. If this motorcycle had been part of the motorcade it might have picked up sounds of the gunshots. If true, those sounds could be used to determine how many shots were fired, their timing, and using echo location methods, where the shots came from.

The original recordings were made on machines which utilized a stylus which etched an acoustic groove into a soft polyvinyl surface. The recording instruments were useworn and had developed idiosynchracies. Jim Bowles, head of police communications unit at the time, writes that the needles would sometimes not "groove" properly, that parts of messages would not be recorded, or a "ghost" signal would be recorded. He also states that it was a common experience to observe noticable changes in speeds between units [Bowles 1979].

Secondly, the original recordings had become scratched and worn from multiple playbacks during the transcription process that was applied during the Warren Commission's investigation. As a result, the tendency for the stylus head to skip was exacerbated.

Thirdly, both recorders had a sound-actuation feature which was designed to save space on the recordings by pausing whenever there were periods of dead-air. To the extent that this happened during the critical sequence of events there would be disagreement between tape time and actual time.

Fourthly, the electronic recordings which have entered into evidence involved the use of separate playback and/or recording instruments, sometimes both, which inevitably results in a time warp because playback speed and original recording speed are unlikely to match precisely.

On playback the needle would sometimes get stuck in a groove and repeat that groove, sometimes twice. Table C-1 of the NRC report subtracted the time that these repeats took from the elapsed time. This seems to make sense, but due to the mechanical construction of the Audograph machine it was the wrong thing to do.

The needle assembly on the Audograph doesn't move at all. The disc is mounted on a spindle and moves horizontally under the needle as recording progresses. The horizontal motion of the spindle is a result of being mechanically geared to a worm gear, such that, as the spindle rotates, the center of the disc moves away from the needle assembly. There is no freedom of motion in this mechanical system, except for the tip of the needle. The repeats happen because the needle tip has some flexibility and may get stuck for an additional rotation or two, but the horizontal movement of the disc never stops and the needle must eventually catch up to where it should be. When the needle does catch up it will skip over sections of the recording. In the long run any repeats will be roughly matched by forward skips where the needle jumps over grooves.

Another copy of channel II was made by the FBI on a high-quality phonograph, instead of using the Audograph machine. The tape of channel II made by the FBI for the NRC panel appears to be a complete recording without skips or repeats in the period in question. The NRC report states, "[the original Gray Audograph was] transcribed, as described in Appendix C, onto tape, with care taken to minimize the 60 Hz hum that was added to the signal and to ensure that no skips or repeats were introduced in the tape recording of either channel. No break interrupted the Channel II recordings as was the case for the Bowles tapes."

Careful examination of the recording during the six minutes after the shooting confirms that there are no obvious repeats in it. A side by side comparison revealed the forward skips in the Bowles version that the NRC didn't account for, and also would have revealed skips in the FBI version had they been there, and had such skips not been precisely mirrored on the Bowles tape.

The FBI tape is a perfect candidate for performing timing studies, except for one problem. As the NRC report says, "The Gray Audograph disk (Channel II) could not be played on an original Gray playback unit without introducing skips and repeats. It was possible to play it successfully without either of these artifacts being introduced by using a phonograph turntable and phonograph arm, cartridge, and stylus. However, phonograph turntables operate at a constant rpm, whereas the Gray equipment's rpm reduced as recording progressed. Moreover, the Gray Audograph records from the inside out, whereas normal records begin at the outside. Thus, when the tapes are played back, there is a speed distortion that causes material at the beginning of the tape (the inside of the record) to be slowed down (time intervals between events are longer and the frequencies are lower than those originally recorded) and material at the end of the tape (end of the record) to be speeded up relative to true speed."

Read more at
http://mcadams.posc.mu.edu/odell/
Posted by Philip Sanderson at 11:10 am