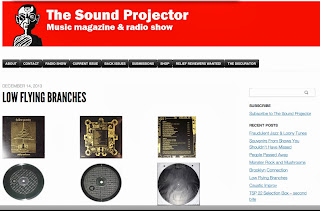 To end the year a nice review of Hollow Gravity LP on the Sound Projector website. Given the volume of releases coming through Mr. Pinsent's door, reviews in the Sound Projector can be a little after the fact though rather than being a cause for complaint in the internet world in which releases are hyped to death for about a week and then all but vanish the longer slower approach arguably has its merits. The LP of Hollow Gravity sold out some time ago though copies can be found online without too much trouble and/or you can of course get a digital version on the Bandcamp page here.

Posted by Philip Sanderson at 11:31 am No comments: 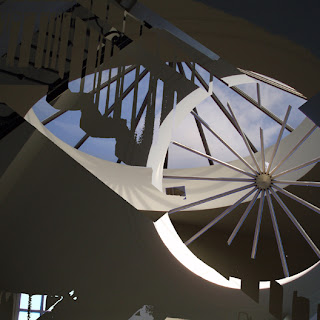 Myself and VDO have been working on a couple of collaborative tracks. The first fruits of our labour is Drums in the Sanctuary (the office abandoned, she descends into the underworld) the title being a willful misreading of this. Another track is already recorded and who knows if a willing body can be found there will be some kind of release this year.
Posted by Philip Sanderson at 3:14 pm No comments:

The Gift of Vision and Sound 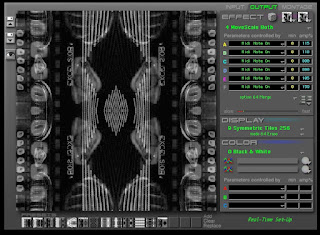 This Saturday at the Furtherfield gallery One minute (Volume One) curated by Kerry Baldry  will be screening. Included, as part of the programme is a video called Jiggery Pokery I made back in 2005. Jiggery Pokery was part of a sequence of pieces, which attempted to very directly link sound and image.

During the 1990s I created a number of installations in which a key element was the interplay of sound and vision, and once I got my first Mac in late 1997 I began experimenting with various programmes that allowed you do this on screen. The Mac in question had a blistering 200 MHZ processor and it wasn’t until 2002 when I upgraded to an iMac G3 (600 MHZ) that really anything of interest began to happen. In 2001 I also came across an application called Vidoedelic that provided real scope for linking image manipulation to either sound or midi signals.

Using sound files or live sound in Videodelic was rather imprecise, working as it did rather like a colour organ by filtering the sound into frequency bands (bass, mid or high) and then allowing you to apply one or other band to a parameter. Anything other than a very straightforward bass beat was hard to track. What worked much better was using MIDI data.

The MIDI value of notes could be precisely matched to parameter changes. So for example as you ascended up a scale an image could rotate in steps precisely equivalent to each interval. Using this approach I worked up a number of pieces. As with the installations the idea was to use sound to animate the image in some way, articulating a tangentially related aspect or property. So for example in A Rocco Din the idea was to take a picture of an accordion and then have a piece of accordion music perform a digital dissection of the image. 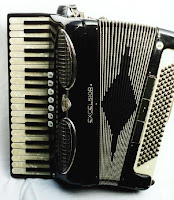 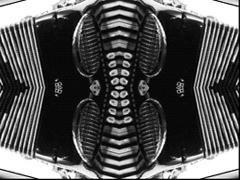 A Rocco Din was the first piece to be completed and took a couple of months to finish, this was largely down to technical problems as though Videodelic can record QuickTime movies of its output it can’t do this when being controlled by MIDI, only when using sound files. The solution ended up being using an on screen recorder with the midi track running at ¼ speed then speeding it all back up… all in all far more than the iMac could handle. Arriving at a perfect sync, which was in a way the whole idea proved to be very difficult. 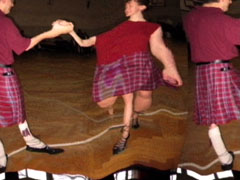 The next completed piece was Jiggery Pokery. Again working from a single image this time of two highland dancers and using an adapted MIDI file of a highland jig as an animation source the image was coerced into ‘dancing’. By this time I had acquired a box that meant one could play the piece live on the iMac and output the VGA of the computer to a DV camera. Not entirely without loss of quality, but a lot easier than the first method. 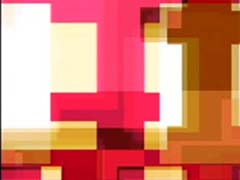 Two more pieces were completed using a similar approach Quadrangle and Row Row, working from an image of a white square and of two men in a boat respectively. Quadrangle uses a quasi-random midi sequence generator producing a possible more inventive series of sequences than those used in A Rocco Din or Jiggery Pokery. Quadrangle also uses the midi data to change the colour of the image. Row Row in contrast is the most straightforward of the four works with the image of the two men in the boat being stretched to create the illusion of the image rowing. 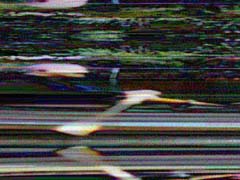 Looking back of the four pieces, Quadrangle and Jiggery Pokery still seem to ‘work’ the other two seem a little too restrained possibly hidebound by the technical difficulties it took to simply finish them.

After making the four pieces, which took best part of two years I largely stopped using Videodelic as it was never upgraded from OS 9 to Mac OS X, and the problems with capturing the output were never resolved. Instead I began to use Max/MSP/Jitter to make pieces such as Fleshtones.

It might be interesting one day to revisit the pieces in a more performative fashion.
Posted by Philip Sanderson at 12:33 pm No comments: