Storm Bugs - A Safe Substitute - An industrial Classic From Years Ago.

Review in Polish of the Storm Bugs A Safe Substitute CD re-issue on Klanggalerie. This is a loose translation. 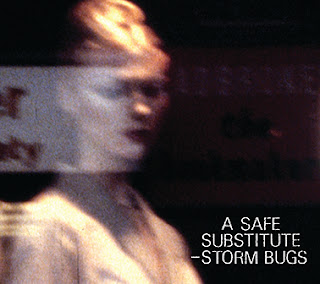 An industrial classic from years ago.

If you follow the leads from classic industrial in the late 1970s towards earlier genres, in retrospect, you can see that psychedelia and krautrock (including kosmische musik) had the greatest influence on the birth of this genre. This can be heard perfectly in early Throbbing Gristle recordings. No wonder: after all, Genesis P-Orridge was a veteran of the hippie counterculture and was well versed in the music created at the turn of the 1960s and 1970s. Thanks to the Throbbing Gristle albums, these influences also appeared in the works of younger musicians who appeared on the British post-punk scene. Storm Bugs group was one of them.  There was actually one man hiding under this name. Philip Sanderson who came to London from Medway Towns to study at Goldsmiths Collage. By chance the school had a completely modern recording studio - and the new student quickly settled in there. He invited a few friends - Steven Ball and Sarah Pomeroy to collaborate on creating songs. As their music began to take shape, Sanderson launched the Snatch Tapes cassette label - and released recordings of a trio that became known as Storm Bugs.

The band's debut release was released in 1980 - and now it returns for the first time on a CD released by the Viennese Klanggalerie label. It is a fascinating document of the early stage of industrial development. Psychedelic influences can be heard in the first four songs that make up the sixteen-minute suite: the processed voices are mixed with guitar distortions and orchestral loops ("Mesh Of Wire"). The songs based on a mechanical rhythm derived from kraut rock ("Hodge") have a more hypnotic character. On the other hand, creating music out of noise, overheard by the makers of musique concrete, enlivens the bonus compositions ("He Rose Up Again" and "333"). The sum of all these elements makes up the ravishing music: on the one hand immersed in a surreal atmosphere straight from psychedelia, and on the other - boldly attacking punk ugliness, focused on grinding loops and factory sounds. All this already has a trance nerve, which is a feeling of the later experiments of such bands as Cabaret Voltaire or SPK, which introduced industrial into the club culture in the first half of the 1980s. and fascinates.

Get the CD here:

Posted by Philip Sanderson at 7:48 pm No comments:

Pillbox by Ice Yacht - Review in The Sound Projector

Under his Ice Yacht guise, Phillip Sanderson put out the cassette version of Pillbox (SNATCH TAPESTCH 219) in July 2020 and at time of writing (October 2020) that physical edition has already sold out. Sanderson proudly points out it’s the first Snatch Tapes cassette release since 1981, reminding us of his post-punk noise and DIY roots and the trails blazed by this great label (home to Organum and Alien Brains as well as Storm Bugs). As to Ice Yacht, he hasn’t used this alias since the 2015 tape Pole Of Cold on the German label Fragment Factory, which aimed to deliver a bit of ambient electronic dronage themed on a sea voyage topic.

Pillbox is supposedly painted from “a more industrial palette” according to creator, but if so it’s certainly on the more humane and approachable side of that sometimes bleak and dehumanising genre…I mean the tones are generous and rich, mysterious and eerie where the usual industrial mode is to settle for “frighten all listeners” with visions of apocalyptic doom, hopefully set against background of an iron foundry. This may have something to do with the creative process behind these four cuts. Rather than working exclusively in studio (be it virtual or otherwise), Sanderson started out by collecting odd sounds from nearby Romney Marshes, before taking said tapes home to manipulate through treatments and blend into feedback loops, as surely as making bread with fresh yeast. In method, execution and (to large extent) final production, the record is closer in spirit and intent to any given INA GRM LP or release on Disques BAM, highly sympathetic to the Schaeffer-approved mode of transmutated recorded sounds. My favourite cut is ‘Slow Water’, whose limpid and melty qualities we enjoy, transmitting sense of travelling through some surreal underwater scape.

Hardened tough-nosed listeners may prefer the title track, a steely glimpse of eternity in just 13:30 and shot through with a becoldened sense of menace (one possible link back to the industrial mode). This ‘Pillbox’ cut also happens to open the session and evidently is intended to usher in the mood of the general project like an architect’s anteroom. Many layers and leading towards a rather cluttered attic of the mind, which may be why ‘Slow Water’ hits the spot in terms of imaginative thirst-quenching. On the other hand ‘Pillbox’ keeps building to a relentless, noisy future where many sonic clobbers await the unwary and unguarded face. This leaves us with the two short tracks ‘Ice Spikes’ – an evocative title if ever there was – does the creator see painful instruments of death when he beholds the humble icicle? Noise here is an ugly clatter of metallic percussion getting nowhere, a chaotic brew. Heavily disguised source materials given extra alienation through wobbly studio processing. For enjoyable “pop music” fare (in this context, tune ye to ‘Up and Over’, less than 90 seconds of Glass/Reich styled repeating arpeggios disguised as library music. Love this piece of semi-pastoral miniaturising, but it seems out of place in remaining company.

Lockdown conditions in the UK have helped shape this work, giving Sanderson ample time to meander in various environs and consider his creations, mulling them over like so many stewed pears.

Posted by Philip Sanderson at 6:15 pm No comments:

Posted by Philip Sanderson at 5:10 pm No comments: