Picture Motion - Some Thoughts on Illusion

Update of posting first made in August 2005 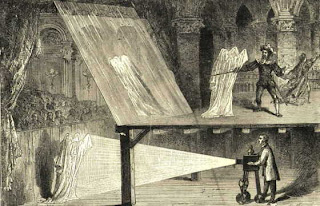 Just as with the smoke and mirrors of Pepper’s Ghost or the magician’s routine, early cinema began life as something of a self-professed "trick". This was not a cinema of narratives in the Hollywood sense but of the grande spectacle as Tom Gunning notes (1988) film ”was less a way of telling stories than a way of presenting a series of views to an audience, fascinating because of their illusory power”

Early cinema’s location as part of the sideshow or as traveling attraction gave its illusory qualities an in-built reflexivity. Like all tricks (however good) cinematic illusion required the audience’s complicity. The sleight of hand of the cardsharp who momentarily distracts the audience’s attention whilst he slips the ace of diamonds behind his ear was replaced by movement of claw and shutter dragging the next frame into place. By conjuror’s standards film’s routine was crude and simple, in effect a black curtain was being drawn between frames but the degree of complicity was the same. Particularly at slow film speeds you must want to perceive continuity between frames and create for yourself the illusion of movement. In foregrounding illusion; even celebrating it, early cinema was not so much anti-illusionist as pro-illusionist; an active engagement with the inherent trick of cinema itself.

The degree of complicity required is somewhat at odds with the commonly held view (amongst public and film theorists alike) that the perception of motion in cinema can be attributed to persistence of vision; a physical phenomenon located in the eye. Advocates of persistence maintain that either there is a build up of images on the retina similar to the after trace experienced when looking at a moving bright light (a sparkler for example) or that some form of fusion takes place in the eye.

This defect of the eye long since disproved by psychologists is still regularly offered as an explanation for the moving image experience by film theorists. Indeed so ingrained has the theory of persistence of vision become that it is almost taken for granted. André Bazin (1967:19) for example remarked almost in passing that “the persistence of the image on the retina had been known for a long time.”

An effort to enlighten the film community about scientific developments in understanding "persistence of vision’ was made by Joseph and Barbara Anderson in 1978. Seemingly having little impact on what they describe as the myth of the persistence of vision the couple tried again in 1993 with "The Myth of Persistence of Vision Revisited".

The unwillingness of the film community to take on board the Anderson’s resume of developments in the scientific community may stem from the unwieldy nature of some of the terminology used. Put simply they describe two processes called short-range and long-range apparent motion. The illusion of the perception of motion in film falls within the first category and is not retinal but a function of the whole visual perception processing function of the brain. Short-range apparent motion is then not a passive process in which the eye is involuntarily tricked by film into perceiving motion its is an active perceptual system. In other words we the viewer are actively engaged in making the series of individual frames into a continuity of motion, we make the illusion happen.

Our complicity in engaging with and willingly seeing illusion repositions the viewer as participant rather than simply a dull and unwitting receptor in the cinematic experience. Without an active viewer there is no motion picture just a series of stills.

Complicity implies a level of active participation and in the sense that the viewer creates for himself or herself the picture motion (it is not on the screen) then they are actively engaging in the filmmaking process. But has the viewer the free will to stop seeing the illusion? As with magic tricks where one can train oneself to see the sleight of hand, the possibility that a viewer could learn to see the "reality" of the individual frames is tantalising though untested.

The Anderson’s annoyance (1978) with the film community for continuing to advocate "the myth of the persistence of vision" rests less perhaps on a proclamation of the audience’s complete free will than on a subtle shift of emphasis from the eye to the brain. "The concept of a passive viewer implied by the myth must be replaced by the viewer implied by an enlightened understanding of the illusion: a meaning-seeking creature who engages the film as actively as he engages the real world about him" [and with specific regard to certain strands of film theory] "psychoanalytic-Marxist film scholars have retained the model implied by persistence of vision: theirs is a passive viewer, a spectator who is ‘positioned’, unwittingly ‘sutured’ into the text, and victimised by excess ideology" In effect the Anderson’s are empowering the viewer and making them a far more active part of the process.

The complicity and mutual acceptance of illusion by both filmmaker and audience paradoxically gave early cinema a transparency (a transparency based on what is not seen rather than what is), which in its development as Hollywood narrative medium has gradually been erased. This is not to say that issues of depiction, representation and illusion have not been the subject matter for a range of film theorists from the structural materialism of writers such as Peter Gidal to the feminist film critique of Laura Mulvey not to mention the psychoanalytic film theory of Lacann and Zizek.

Whilst disparate in their approach and conclusions what such theorists have in common is an acceptance of cinema's basic illusion as a sine qua non and the viewer almost as given. When Gidal (1989) for example is a talking about an anti-illusionist cinema he is referring to issues around the illusion of the depicted and the represented whilst seemingly ignoring the illusion of cinema itself which must surely first itself be dissected. Whilst resisting the supposedly implicit bourgeois tendencies of narrative the materialist project seems happy to accept the basic mechanisms of cinema.

This taking for granted or presumption of a basic condition of cinema not only closes off an important avenue of exploration and research but also seems to fall short as model for the interpretation of contemporary developments in moving image practice in particular to what is sometimes referred to as either artist film & video or digital media. In many ways these practices and their screening re-locations outside of the confines of the normal cinema and into the gallery return us to the earliest days of moving image and the side show and in so doing force us to reexamine rather than accept the basic cinematic process.

In this context it may be useful to think in terms of not one but many levels of illusion, all of which invite participation to a greater or lesser extent by the viewer. There is the essential cinematic illusion of movement (or its continuity across frames), then we have an illusion of representation (that what is depicted in some way represents something we may have seen outside the screen) and then an illusion of narrative, of some kind of sequential development, not necessarily linear or story telling in purpose but certainly time based. These different illusions should not necessarily be seen as hierarchical but as all occurring simultaneously and interdependently. In much narrative Hollywood film these illusion are traditionally suppressed (in other words complicity is demanded rather than invited) in pursuit of often straightforward literary and drama based story telling. However in classic anti-illusionist cinema polemics (if not always in the films themselves) the illusion of representation is problematised and the illusion of movement ignored and narrative declined. This approach serves to sever the link to Hollywood but does not result in a true materialist cinema but rather just a stunted one. A cinema in denial rather than one, which declares its pro-illusionist essentiality.

Update of posting first made in August 2005 - first two comments from origianl post
Posted by Philip Sanderson at 9:56 am 5 comments: