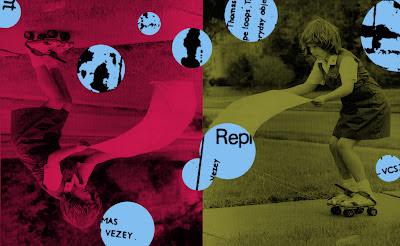 To vaguely coincide with the imminent release of the Hollow Gravity LP on Puer Gravy, Daniel Blumin at WFMU has kindly asked me to record a session for his Saturday night radio programme (to be broadcast on June the 9th - see at the end for full details).  The 5 tracks revisit some of the ideas and techniques I used in the Reprint project recorded back in 1980 (originally released on cassette under the name of Claire Thomas & Susan Vezey and then re-issued on CD in 2006 by Anomalous). 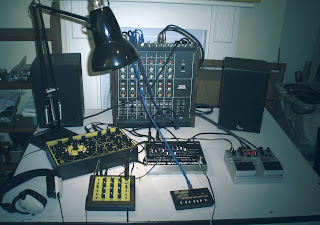 As with Reprint the recordings for this session were made using a deceptively simple set-up comprising: an analogue sequencer, a synthesizer and a 2-6 second delay system. The 8-note sequencer plays simple patterns but as they are fed into the long delay the beats begin to multiply and soon busy percussive rhythms start to emerge. 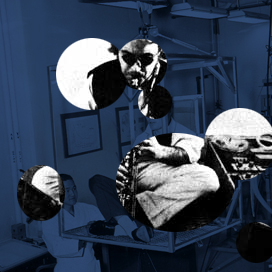 Long tape based delay systems were first used by Terry Riley back in the 1960s. Two tape recorders are employed – set a few feet apart with the tape stretching across the room from one machine to the other. The first machine records whilst the second plays back. This produces a delayed signal but by then passing this audio feed back to the first machine a feedback loop is created in which whatever is played into the system repeats ad infinitum or more commonly fades away after many repeats.

Riley called his system a ‘Time Lag Accumulator’ and used it for long pieces such as “Poppy Nogood and the Phantom Band” in which he would build up a layers of bubbling tones over which he would improvise.  The delay system with its feedback loop is the “Phantom Band”.
Tape delay was brought to a much wider audience by Brian Eno who used it in both in his two collaborative LPs with Robert Fripp and on his own 1975 LP Discrete Music. On the cover of the latter Eno helpfully included a diagram. Inspired by this and what I had read about Riley in 1976 I built my own tape delay. I found some cheap domestic tape machines at the local market which ran at 1 7/8 inches per second, this meant it was possible to get very long delays even within the confines of a small bedroom, it also meant that the sound degraded very quickly. 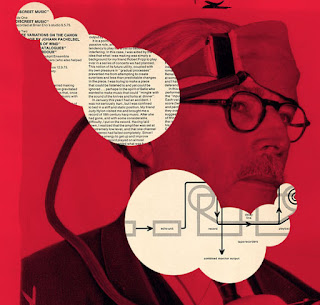 An aspect of tape delay not highlighted by Eno is that whilst it can be regarded as a generative system it is also a degenerative system in that each time a sound goes round the loop it is coloured by the characteristics of the equipment being used. If a sound is echoed/repeated say 100 times one is in effect recording and playing it back that many times, in other words to use the old analogue tape terminology it is 100th generation. The frequency response, noise and hum levels, wow and flutter of the equipment are thus magnified (in this example by a factor of 100). Using a high end tape machine like a Revox the degradation is relatively slow (though arguably still integral – more of which later) on the cheap domestic machines I was using back in 1975 the sound would relatively quickly break down into white noise something which seemed an interesting and potentially exploitable characteristic.

By 1978 having now accees to Revoxes, VCS3s and a sequencer I began to experiment with exploiting both the noise potential and rhythmic possibilities of tape delay. That Riley called his ‘Time Lag Accumulator’ a ‘Phantom Band’ may have been a reference to the semi autonomous nature of delay systems; specifically that once set in motion they seem to have a mind of their own. Delay and player easily get locked into a particular almost pre determined grooves that are both absorbing and hard to escape.  What often happens is that the player will hit a first note, wait for it to repeat to get a sense of the delay timing, then adds a second note, wait for that to return and then add two more in a counter rhythm and so on. All very pleasing but also after a while predictable.  Using a sequencer can potentially allow one to force the ‘Phantom Band’ to play numbers it might no want to, to in other words funk the phantom.

This was the basic premise of the two long electronic tracks on the Reprint cassette. Additionally rather than simply connecting the output of the playback tape recorder to the input it was fed through a graphic equalizer thus allowing one to accentuate the colouring and sound shaping aspects of the delay system. In both “Reprint 1” and “2” (hear MP3 of Reprint 2 here) this is used to encourage the degeneration of the sound; beginning with minimal rhythms and building into a wall of percussive white noise resulting in a sound not unlike tap dancing or stalactites falling in an underground cave.

So much for the history why revisit Reprint?  Well partly as this was a session rather than music for an LP I wanted a method that was live, direct and improvisatory. Something one could do in one or two takes or with minimum of overdubs and editing. There was also a sense of unfinished business. “Reprint 1” and “2” were arguably successful in dislocating the ‘Phantom Band’s’ natural sense of rhythm but I thought it might be interesting to see what with a little more time and contemporary equipment could be conjured from the system. There is also something about the nature of echo. When we hear an echo our perception is of something receding, moving away from us and decaying. Paradoxically though the repeated sound travels not backwards in time but forwards into the future, it lingers on after the original sound has gone. It is the past coming back to haunt us. So in revisiting Reprint there is a double recuperation of old ghosts; firstly of the sound itself in the delay system and of a project echoing back from 1980 to the present.

Daniel Blumin’s show is broadcast on WFMU on Saturday nights between 9 PM and Midnight. In the UK this means the show airs five hours later between 2 and 5 AM on a Sunday morning. Never fear though there are of course playlists and podcasts available. The Sanderson session will be played on the evening of June the 9th (New York) meaning the morning of June 10th (UK).

Posted by Philip Sanderson at 8:35 pm No comments: