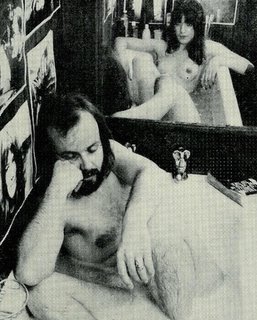 Normally I give up on telly at about 11pm and listen to the radio for an hour so in bed. This pattern may well date back to the 70’s when along with a significant percentage of the nation’s youth I would listen to John Peel at roughly this same time. Yesterday however in a reversal of this pattern I eschewed the wirelesses charms to watch a programme on John Peel’s record box, the one he apparently kept under the desk in his study, which contained those extra special 7-inch discs.

Since the DJ’s death just over a year ago something of a post Peel industry has grown up. There have been books and tributes aplenty, special concerts, people claiming to listen exclusively to records that Peel played and so on. The tributes in particular are becoming quite formulaic; usually we are regaled with tales of what a good egg Peel was by various luminaries, the opening bars to Teenage kicks are played and that’s about it. Last night’s programme looked from the listings as if might reach further and actually talk about the music in some depth but no, instead yet again we had nothing but the briefest of snippets from tracks interspersed with you guessed it luminaries waxing on in Oscar speech style about how great John was. Somewhat bizarrely the list of those providing the quotes extended beyond the usual Morley & Co to include Sir Elton John, Roger Daltry, Ronnie Wood and the lads from Quo. Now we know that Peel had a soft spot for the Faces and there was a copy of Down Down in the box but Elton John?

In effect it was talk and more talk with occasional music which ironically is the exact reverse of what John Peel was about; he was one of the few if not the only mainstream broadcast DJ to recognise that its the records and not the DJ patter that matter. For your average Radio 1 or commercial station DJ, records are just something to pad out the show’s core content of inane ramblings, phone in quiz shows, traffic reports, guest speakers, factoids and so on. That Peel was the almost the only one to get the balance the right way round was a blessing but reflects perhaps less on his saintly qualities than the dire nature of the rest of radio land.

As was noted on this blog sometime ago outside of London the FM radio dial is all but empty and it was in this context of BBC dominance that Peel could be so influential. There was no one else, no college or genuinely independent radio stations no other broadcast outlets for music that was outside the mainstream play list. But though Peel was passionate about music and not patter or overt self-promotion he was just one man with a series of eclectic but ultimately personal tastes. Peel wasn’t keen on industrial music, or Momus for example or even records that faded in quietly. You were not likely to hear any soundtrack or genuinely avant-garde or electronic music on Peel.

Peel’s instincts were ultimately “pop”; it was just that he could hear the pop in say the Undertones and the Smiths where others couldn’t (at least at first). On the whole though Peel liked music that was short snappy and relied on tried and trusted, often blues based chord progressions. Rather than say listen to the same Beatles records over and over as some might though Peel was always keen to hear a new take on the old formula. As such he was the ultimate Radio 1 DJ and a godsend to a music industry that needs a constants supply of novelty. However put Peel’s broadcast output up against that of say Resonance Fm and it starts to look a little wanting.

This all sounds perhaps a little harsh but Peel would have been the first to acknowledge that Radio 1 would have benefited from having a bunch of presenters who in their own way were as passionate about music as Peel. Rather than piling on further tributes to the “exceptional” John Peel the BBC should be turning our attention to changing the face of the unexceptional mainstream broadcast waves.
Posted by Philip Sanderson at 10:43 am

You have a nice blog here too. Shame about the Eltons and the Cliff Richards of the world jumping on the John Peel bandwagon. I'm sure John would find it very amusing. i taped the prog. but havent watched it yet. You've rather put me off!

Skewed as it towards interviews with people who Peel was I’m sure possibly not that fond off, I would say its still worth watching; look out for somewhat bizarre interviews with his former Housemaster and Michael Palin, who looks somewhat uncomfortable but apparently knew him at school!

I caught snatches of it.

The impression was that people (Bolan in particular) disassociating themselves from Peel when they'd made it, rather than vice versa. Peel shunned the trappings of celebrity but seemed to like the individuals personally. So I wasn't that surprised by Reg's appearance given his connection with Bolan and he's trying to acquire some late career credibility, by name checking 'hip' new bands, etc. Was there an Elton record in the box perhaps? That seemed to partly determine the choice of celeb. If so did I miss Sheena Easton?! And I'm sure there's a copy of Table Matters kicking around in there somewhere!

But worth a watch if you've got an hour to kill.

Yes you are right about a late career search for credibility; listening to Mr Dwight last night you would never have guessed that he's spent the last 30 or so years making pretty awful records...

Oh Come On! What about 1983's Too Low for Zero with the drive time classics Kiss the Bride, I'm Still Standing and I Guess That's Why They Call it the Blues???

Actually have a small soft spot for I'm Still Standing, always though that it would make a good mix with Bowie’s Modern Love

oooh good to see Path Through the Forest by the Factory (1968) is in the box. It's like a prototype Stone Roses but somehow so so much better.