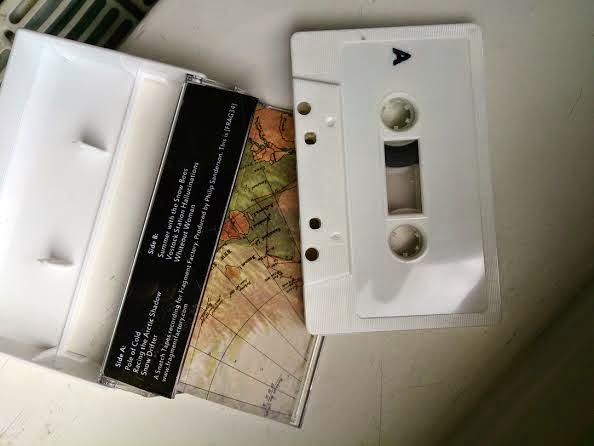 Tucked away on Snatch 3 (the last of the Snatch Tapes compilations released in 1981) is a track by Ice Yacht called ‘0 Degrees North’. An austere piece of drum loop and drone music, there was talk of a full tape having been recorded by the band (?) but no documentation of any further releases can be found.

Rumour had it that members of Ice Yacht had embarked on an ill-fated trip to the North Pole attempting to retrace a journey made by the Norwegian explorer Fridtjof Nansen in 1888. This story was given credence when last year a polar research group uncovered a cassette tape in a vacuum-sealed case in the permafrost. The white tape was marked simply Ice Yacht – Pole of Cold.

After letting the tape thaw out it was then baked in a temperature controlled oven for 5 hours and though some oxide had peeled away the tape was playable allowing the transfer of the recordings. Pole of Cold contains six tracks of analogue electronics seemingly mapping an arctic exploration to the coldest place on the planet though exactly when and where they were recorded is unknown.

Fragment Factory have now made 100 numbered replica copies of the tape and  it is available now on white cassette.

Posted by Philip Sanderson at 9:04 am No comments: