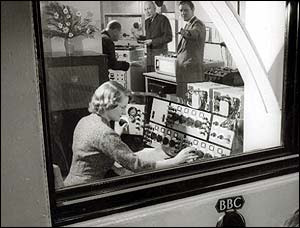 Last night went to hear (and see) The Life and works of Daphne Oram at the Purcell Rooms. Oram is a little like Delia Derbyshire’s maiden aunt; older, rather primmer in appearance and voice.

Things kicked off with Snow the Geoff Jones film for which Daphne did the soundtrack. Snow deserves the term “classic” a masterpiece of cross cutting and on the beat edits of locomotives pitted against the winter elements all set to Daphne’s slowed down and treated version of a Sandy Nelson number. The lights were then dimmed for the playback of a number of Daphne’s works. This was altogether quite odd; after the screening of Snow this was very much music with the picture turned down as we were now as an audience in a cinematic mode of reception. Surprisingly it was actually highly effective. There was no sense of feeling cheated that we were just listening to a playback with no one on stage even pretending to tweak the EQ or stare at a MacBook. It created a perfect space for concentration and the space for visualisation was left purposefully empty.

The music itself was quite a revelation. The Oramics CD released last year suggested Daphne’s music to be more of historical interest than delivering actual musical pleasure but hearing Four Aspects, Episode Metallic and Pulse Persephone (which are included on the CD) in this context made one aware of just how subtle the works are. The CD mixed such pieces in with some of Daphne’s more commercial work; electronic jingles for power tools and so on and left one with a feeling of quirkiness without substance. This notion was quite dispelled by this playback.

Perhaps less mesmerising was From One to Another  for viola and tape. This reminded me of those rather worthy pieces one used to sit through at St John Smith Sqaure which combined tapes with a classically trained musician’s bowing. Things were to go further downhill though for there followed a 30-minute live remix in which a selection of tired beats and buzzes were overlaid with samples of Daphne's music, which seemed to bare little resemblance to anything Daphne originally recorded. Accompanying this was some basic video manipulation that did little to enhance the music. Many of the audience left for the refuge of the bar.

The evening rounded off with another Geoff Jones film Trinidad and Tobago; a documentary funded by BP that avoided using an overbearing commentary but just combines beautiful footage with an Oram soundtrack. The film helped to restore the mood somewhat and sent us off into the night.
Posted by Philip Sanderson at 8:16 am 2 comments:

There was a time in the great hegemony of mainstream musicalsim when only one or two tags were needed to categorise music "file under progressive or popular" was all that most record shops needed with a smattering of spoken word, country, jazz and misc. Tags as a way to define or carve out a musical territory are now so prolific as to be all but absurd. Here for example is just one group's tags from Last FM: alternative rock ambient electronica contemporary electronica dark electro dark pop depeche mode downbeat downtempo dreams and fantasies electro electro psychedelic electro-acoustic electro-psychedelic electro-rock electronic electronica electropop elektro elektro-indie full-on indie electronica instrumental intrancewetrust progressive trance psy-trance psychedelic psychedelic trance psytrance retro electro...

Tags though date faster than Nike trainers and all of the above already seem a little past it. "Anyone for trance, one lump or two" they murmur in the retirement home disco. So we need a new supply of tags to keep us box fresh. Being prompted yesterday to tag some of my own tracks I responded with nu-bleep, downdrone, avantient, sickstep, homesung, duityorself, fadfleet, voodle, etc, etc.
Posted by Philip Sanderson at 9:40 am 1 comment:

Heading towards another Boat 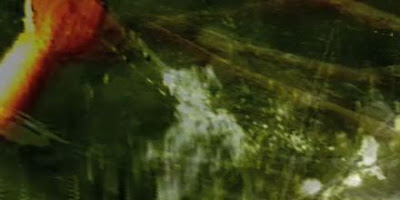 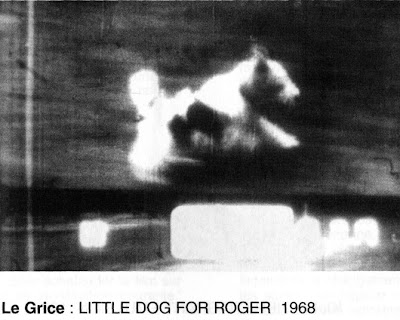 Almost the first thing Le Grice said was that he had been wrong to deny or ignore the overtly personal nature of the footage used in Little Dog for Roger. At the time of its making and for a number of years afterwards the choice of footage of family members and pet had been presented as almost random; a matter of chance that this old 9.5mm home movie footage happened to be hanging round and so was used to make the piece. It seemed now however that Le Grice was acknowledging that the choice of footage was not just a random selection and that the personal nature of the subject matter was in some way integral to the piece.

This is not to say that somehow Le Grice is re-branding himself as an artist home move maker in the manner of Derek Jarman but there is a recognition that the interaction between materialist strategy and subject matter is a far more complex one than was presented at the time. Over and over again materialist filmmakers chose what in any other context would be seem as overtly romantic things to film. Ponder for a moment Fog Line by Larry Gottheim or Le Grice’s own Whitchurch Down or Gidal’s Clouds. Read the accompanying texts and polemics and one learns much about process, about disrupting any sense of naturalistic representation and so on but scant attention is paid to what was in front of the camera. By reconnecting to the subject matter of these films whilst not denying the material process what emerges is an alternate form of depiction. Alternate and in opposition to the narrative impulses of the mainstream cinema of the day but a depiction nonetheless. A depiction whose material process and processing is in many respects stylized and painterly.

Attempting a reconsideration of Le Grice’s work in the context of a reconnection to the subject matter of the films and digital works is simultaneously straightforward and highly complex. Straightforward in the sense that those of us who came to such pieces after the first flush of polemical materialism often took for granted that the subject matter was integral to a reading of the work even if it was often played down or unrecognsied by the filmmaker. Complex in that a complete reinterpretation of an artist’s work that runs counter to most of what he himself has written (and said) is naturally problematic.

There is a further complication of a purely personal nature as well in that for some time I had been aware that the descriptions of my own work on the Psouper website are similarly process descriptive and avoid much if any investigation of the subject matter. “Digital videos that upset the hierarchy between sound and vision resulting in unexpected synchronisations, sonifications and visualizations.” Or “A white square is animated by a quasi-random score of electronic sequences generated in max/msp, causing it to contract, expand, duplicate and in so doing perform a series of performative movements and steps “…tells us very little about what we might expect to see and to an extent parodies the process led descriptions of structuralism.

In part this was intentional as during the 90’s when making installations and simultaneously reviewing for Art Monthly I tended to write at some length about my own work in press releases that accompanied the exhibitions. After a while this seemed, well, just a touch vainglorious and I erred on the side of letting people watch the work and hopefully on some level it would be self-explanatory. On some level it is obvious what the subject matter is and yet I would struggle to put my finger on it.

In other words I think the time is ripe for a real re-assessment of materialist filmmaking that re-connects with the subject matter and perhaps for myself to also attempt some declaration with regard to subject. These two projects are of course quite distinct but also inextricably linked.
Posted by Philip Sanderson at 5:34 pm 4 comments: