Rumble of the Ruins - Reviews

A couple of nice review of Rumble of the Ruins are in. Firstly a review by Ed Pinsent form his Sound Projector. 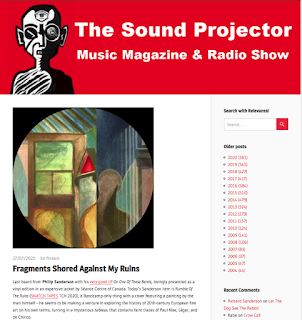 Last heard from Philip Sanderson with his very good LP On One Of These Bends, lovingly presented as a vinyl edition in an expensive jacket by Séance Centre of Canada. Today’s Sanderson item is Rumble Of The Ruins (SNATCH TAPES TCH 2020), a Bandcamp-only thing with a cover featuring a painting by the man himself – he seems to be making a venture in exploring the history of 20th-century European fine art on his own terms, turning in a mysterious tableau that contains faint traces of Paul Klee, Léger, and de Chirico.

Musically, Sanderson is getting back to what he does so well – songs and electronica, a form of synthop with drum machines and treated vocals, produced in a very eccentric DIY post-punk manner. This is quite different to the lush, soundtrack-y productions we heard on On One Of These Bends, and there’s a lot to be said for the immediacy of these concise and assured ditties, most of them clocking in at traditional pop-song length of three minutes. Sanderson may make it seem easy, almost throwaway at times, but I suspect there is a lot of craft underlying these songs, both in terms of composition, lyrical content, and sheer effort spent programming and overdubbing (or however he created it). Each song sounds both jaunty and slightly unsettling in equal measure; I’m not sure what is causing this impression, but while the rhythms are upbeat and foot-tappingly catchy, the melodies keep veering towards a darkened minor key, and the song delivery has a strange urgency to it.

That’s not to mention the lyrics, which today strike me as fairly bonkers (in a good way) – like an update on the king of balmy, red wine-soaked laissez-faire, Kevin Ayers. If I explored this pathway any further, we might end up making a case for situating Philip Sanderson in a line with other 1970s English songwriting eccentrics, such as Robert Wyatt, Eno, Pete Sinfield and Peter Hammill. I mention this as I think it’s a dimension of Sanderson’s considerable skillset which isn’t spotlighted too often, as he’s more often pegged as a cassette band / post-punk / noise artist. Personally, I also prefer his song-based work to the all-instrumental music of records like Seal Pool Sounds (2005). From 15th January 2020.

Review by Neil Kulkarni from The Wire September 2020. Part of a longer review which also includes Pillbox and releases by Steven Ball and Crumpsall Riddle 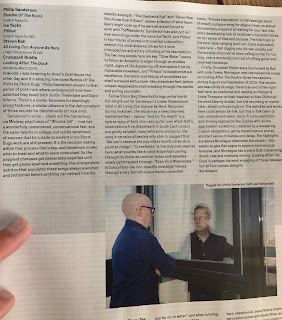 How odd l was listening to Hood's Cold House the other day and it's amazing how close Rumble Of The Ruins by Storm Bugs' Philip Sanderson shears to that period of post-rock where underground rock fans admitted they loved both Justin Timberlake and Disco Inferno. There's a similar fondness for startlingly poppy textures, a similar pleasure in the detournement of those sounds for determinedly art rock ends.

Sanderson's voice- check out the Canterbury via Medway psychness of "Window Sill" - now has a wonderfully unmannered, conversational feel, and the same talents in collage and subtle derailment of sources that he's made so evident in his Storm Bugs work are still present. It's the decision making within that process that's key, and Sanderson knows what to treat and what to leave untouched. So the poppiest choruses get deliberately amplified until they get glassy eyed and unsettling, the strange sonic detritus that populates these songs always executed and jettisoned before anything can detract from the melodic strength. "The Elephants Eye" and “Raven Row (You Know How It Goes)" deliver a flavour of what Kevin Ayers might cook up if he were alive and forced to work with the Residents.

Posted by Philip Sanderson at 1:11 pm No comments: