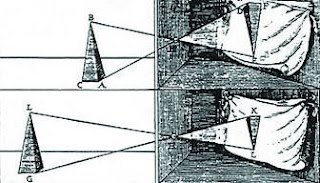 The term camera is a shortening of the Latin camera obscura (literally dark room), and at its very basic the camera is just that, nothing more than a windowless room with a small pinhole onto the world outside. Light passes through the hole and forms an upside down two-dimensional image on the back wall of the room.

In its simplest state the camera obscura is if you will a form of immediate cinema, an immediate cinema that has dispensed with all the apparatus of complex lenses, shutters, film, projector and so on. There is no script or direction above and beyond the placement of the pinhole; the cinema makes itself, free from edits and other manipulations and human interventions. There is in this immediate cinema a continuity of temporal expression a durational equivalence tempered only by the most momentary of delays, namely the speed of light.

This immediate cinema can only be seen live, in real time, every screening is a one off never to be repeated. All screenings are in full colour with what in the video world would be called full frame full motion. The camera obscura is reflexive about its representative mechanism. That the image is upside down is in itself a declaration of the origins of the light. This then is a pro-illusion device.

If only we could leave it at that. If only we could let the light waves disperse and die of their own accord. Instead the trajectory of camera making has been all about how best to fix the fleeting image on the back wall. Like trying to pin down and classify some elusive wild animal the immediate cinema of the camera obscura is problematised by our desire to in some way capture the image.

The earliest form of capture was simply pencil and paper. Rather than make hand eye estimates of the shape and position of things, by using the camera obscura seemingly highly realistic details could be recorded by artists. Without entering the debates as to whether Caravaggio used the camera obscura on this or that painting it is clear that from the renaissance onwards artists began to use the device as an aid. In a sense photo realist painting was being practiced several hundred years before its invention.

Photography proper merely simplified the process of tracing the fleeting image. Place some suitably light sensitive paper on that back wall and it will map the play of light for as long as the pinhole remains open. If the light sensitive paper is suitable processed and fixed we will have a representation of the fluctuating light during the pinholes opening. These pinhole pictures with their long exposures blur the moving and leave the stationery clearly defined. As records of a given duration and the attendant density of light accumulation they again have a refreshing pro-illusional quality.

Replace the pinhole with a complex lens and faster more responsive emulsion and we begin to enter the nightmare that is modern stills photography; all guile and deception and evacuation of meaning. For now both static and moving objects are arrested; as if a hand was at (literally) lightening speed tracing the outlines. Such images are rich in detail but poor in content.

Animate a series of such photographic stills and we have the makings of a cine camera. Such a camera/projector (all early devices where able to perform both functions) can in a limited way replay the magic of the obscura but introduces a whole new set of problems. Gone is the immediacy, gone is the live transmission and the temporal equivalence, and gone for the much of the 20th century was the colour. No longer happy with the continuity of light itself we begin to tinker with cuts and edits. Compressing and cutting out what is seen as unnecessary and extraneous time.

The camera itself is progressively shrunk and mobilised; no longer stationery it starts to dance and dive, taking close ups, medium shots and all the narrative suggestion that framing involves. As the essential meaning of the immediate cinema of the obscura starts to evaporate we clamour to assign new meanings to the rapidly evaporating medium. The self-proclaimed pro-illusional of the obscura is replaced by anti-illusion of the materialists on the one hand and by the suppressed illusion of Hollywood on the other (not to mention all those stumbling blindly somewhere in between).
Posted by Philip Sanderson at 2:34 pm 2 comments: 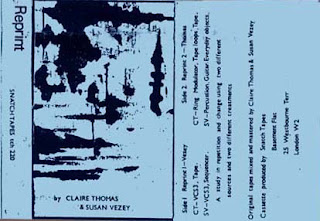 In a previous blog entry I recall bemoaning the state of UK radio; in particular how outside of London there is usually nothing more than the 4 BBC channels and a couple of commercial stations. Radio 4’s news and current affairs coverage is good but music-wise Radios 1-3 rarely step too far from the mainstream. Elsewhere in the world in particular in North America there is whole network of college radio stations who play an eclectic mix of material; often everything from country to industrial with interesting factual programmes mixed in. Programmes may be initiated by one station and then played on several others. It is on such a network that lucky late night listeners could hear in the wee small hours of this morning a Snatch Tapes special put together by Rory Hinchey of Collective Voice. The special comprises choice Snatch cuts from the original tapes and re-issues interspliced with extracts from a fairly lengthy interview I did with Rory last week.

The Collective Voice Podcast in downloadable .mp3 format will be posted to http://www.collectivevoice.net on Saturday, May 5, 2007.
Posted by Philip Sanderson at 9:46 am 2 comments: