Kleptographia – or all photography is theft. 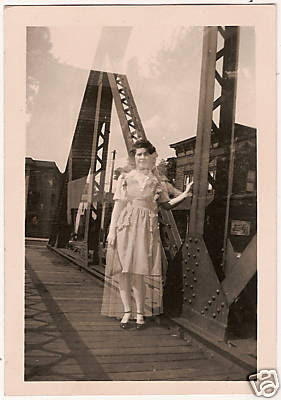 Of course you would be hard pushed to find anything so physical nowadays. The web however is just bursting with (mostly low res) digital clips and stills waiting to be found and recontextualised. Keen viewers of this blog will notice that that is pretty much what I have been doing these last few years. Starting firstly not so much with footage per se but with single photos, an accordion for A Rocco Din, a Harley Davidson engine for Engine Trouble, a pin-up poster of Marilyn for Kisser and so on. More recently I have been using short sections of classic films for the Chronocuts series and this has made this appropriation far more explicit indeed, even foregrounded.

In the Chronocuts series the viewer’s likely familiarity with the original footage is an important part of the process but more generally I am always happier working with someone else’s footage or stills. Or to put it another way there is always an unease about taking or originating either photographs or video. There is a sense in which all filming or taking of images involves a certain theft; a removal of something, which doesn’t belong to you.

I shall call this process Kleptographia. There is here something of a parallel with the idea held in aboriginal cultures of photography stealing the soul of those photographed but concept of Kleptographia goes much further to say that all photographic processes involve an illegitimate transference whether they contain people or not. What problematises that transference over say a process like drawing or painting is that nearly all commercially available camera equipment produce uncanny likenesses. Truer, sharper, blacker, brighter, richer colors and detail; the terminology of photography strives endlessly for perfect reproduction to act as some kind of seamless mirror reflecting a reality back to us. Or some illusion that passes for reality. The constant need to resist the illusion of reproduction becomes a time consuming process and can make it all but impossible to originate such material. Where does one look, brazenly through the lens as one swipes the scene? Easier to break a window and make off with a fur than stand on a street corner taking photographs.

So if unhappy to be a part of the Kleptographic process and steal the images in the first place why then happy to be a “fence”: a handler of stolen shots? With found footage and stills the anxiety of the original theft is lifted. The crime being subsumed by the supposed ownership of the image taker. The image or images do not of course belong to the original taker, the thief, they belong to the scene form when they were stolen. The thief’s claim on the images enshrined as it is in copyright law means the fence in this context is by handling the goods serving to release them from the thief’s grasp. Short of destruction and the death of all who have seen the pictures the theft can never be legitimized but in re-appropriating them there is a sense in which one can partially liberate them from the notion of ownership.
Posted by Philip Sanderson at 2:10 pm 2 comments: 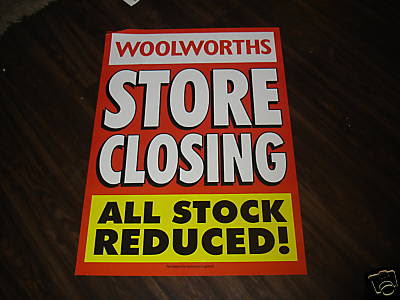 Many branches of Woolworths closed their doors for the last time on Saturday. Since the company went into administration in December it has offered a curious spectacle; its increasingly empty aisles filled with a mixture of bargain hunters and those who just came in to stare. Many seemed to be wandering aimlessly round the store gawping with a curious mix of fascination and nostalgia at the slow motion death throes of a retailer which has been on every UK town high street for 99 years. “Woolies” at it was affectionately known will be genuinely missed by many not least those without the transport to get to the out of town ASDA or Tesco.

In the high street the demise of Woolworths comes on top of a spate of recent shop closures leaving parts of many town centre bleakly empty. The closure of most of these shops was not however bemoaned, as was the passing of Woolworths. There was something symbolic in the closure of Woolies as one person was overheard to say “ its the end of the era”. Hardly the most original of phrases but somehow spot on. For the passing of Woolworths brought on as it was not so much by poor trading but a lack of credit to service the company’s overdraft marks some final chapter in England’s Dreaming. A Thatcherite dream that has held sway for almost thirty years who’s central fantasy was that the UK could shut down all of its manufacturing and rely on some shiny suited city types to make the money.

We would leave the nasty business of making things to low paid foreigners overseas somewhere. They could break their backs and inhale the toxic fumes manufacturing stuff and we would take the profit by pushing paper around. Indeed we even encouraged people to come to the UK to do the jobs we were not that keen on doing here ourselves. We as the first post-industrial country were beyond all that dirty work now. All those who used to make things here in the UK were either pushed into the service sector or onto incapacity benefit.

That we got away with for so long is remarkable. That the rest of the world effectively subsidised our relatively high standard of living for doing pretty much bugger all for thirty years is a trick that Malcolm McLaren would be proud of. Sooner or late though we would get rumbled and the man from the Pru really is sans culottes on this occasion.

When Thatcher was busy closing pits in the early 1980s whole colliery towns were left without a purpose; their populations stranded in the middle of nowhere without any jobs or any really reason d’etre. Much of the UK is now in that position.
Posted by Philip Sanderson at 12:07 pm 2 comments: