A couple of weeks ago I bought this box and book off Ebay for the princely sum of £25. 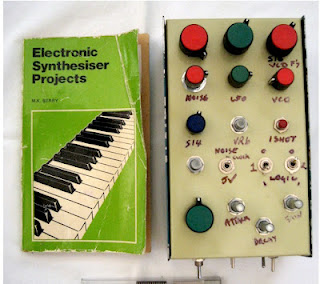 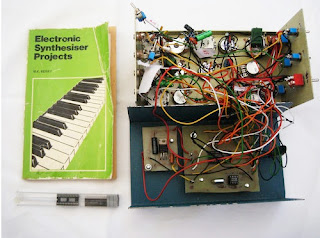 The box turned out to be a (semi complete) circuit based on the SN76477 "complex sound generator" chip which came out in 1978 and which was used in a variety of early arcade games. "Complex sound generator" in practice means a synth on one chip with a VCO, LFO, noise generator, noise filter, an envelope (of sorts) and a variety of modulation options. The circuit from the Electronic Synthesiser Projects book is meant less as a musical instrument and more as a demonstration or test box to show off the chip's possibilities. The book contained an addendum sheet to the circuit but even when the changes are implemented it turns out that the circuit as described still has a major flaw such that if wired as suggested the chips overheat and potentially will burn out! Anyway having made sense of it and corrected the circuit before it was a frazzled mess it now is up and running and produces  a variety of rough and ready electronic sounds. In particular it does do what I had hoped it might which is to make a classic Storm Bugs sound which is a ring modulated, low frequency oscillator/noise rumble. This sound was back in the day produced by a VCS3 and I have had difficulty coaxing it from other synths which on the whole are far too well behaved.
Posted by Philip Sanderson at 12:49 pm No comments: