If you are out and about in Berlin tonight then you can check out that old favourite A Rooco Din at the Videonale being shown at the cinema "Union"Bölschestraße 69 - 12587 Berlin - Germany. Be interesting to see who wins the 'prize".
Posted by Philip Sanderson at 8:26 am 1 comment: 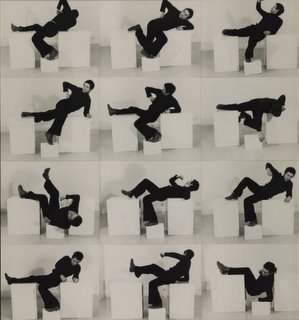 Back in the summer when this blog was a little more “regular”, I reported on the opening of Chelsea Space, a new exhibition venue which whilst located on the campus of the new Chelsea College of Art at Milbank was displaying an independence of curatorial spirit that promised much for the future. The latest exhibition, a Bruce McLean retrospective, does not disappoint continuing the theme of showing work that whilst hardly obscure is somewhat off the beaten track from that seen in more fashionable galleries. Retrospective is actually not entirely accurate for Process Progress Project Archive is a ‘process-spective”, that runs for six week and ends on the same day that Bruce McLean held his King-for-a-day one day 'retrospective' in 1972.


Instead then of presenting all the works simultaneously, artifacts and artworks from McLean’s archive will be installed, uninstalled, performed, projected and so on throughout the duration. Bruce himself will be on hand at points during the exhibition to facilitate the process, talk about the work, who knows maybe have a beer.


Why then does this process based show work when so many that one has visited in recent years seem to have failed? Perhaps it is because unlike other ‘ongoing’ process based exhibitions where one often wanders in feeling as if one has arrived at half time, between sets so to speak here one feels more as if one is glimpsing the edge of something much larger. The nature of McLean’s work facilitates this, as there are copious drawings, sketches, notebooks, photographs, and posters and so on to choose from. Today’s slice through the McLean back catalogue focused on the Nice Style Pose Art Band, which McLean formed in the early 70’s. Nice Style somehow invigorated the insubstantial and effete elements of the pose with a seriousness that belied an underlying conceptual pranksterism.


Nice Style was in many ways the logical conclusion to the artist’s early performance based conceptual work. Pieces such as Pose Work for Plinths date from a time when many young British artists (no not those ones) were embracing conceptualism. Pose Work and the performances of McLean’s contemporaries such as Richard long and Gilbert & George seem to posses an almost effortless conceptualism; simultaneously throwaway and yet perfectly conceived. This is not of course to underestimate the shock or resistance that such work caused and encountered at the time for whilst from an Art History perspective the antecedents of such work can clearly be seen in the unholy trio of Fluxus, Dada and Duchamp the teaching in British Art Colleges in the late 60's was far more traditional.


The Nice Style Pose Art band performed a final Pose Piece in 1975 but McLean and fellow poseur Paul Richards returned for a final coup de grace the Masterwork: Award Winning Fishknife at the Riverside Studios in 1979. The Fishknife took many of the elements of Pose Art and to a Michael Nyman accompaniment produced a peculiar blend of music performance theatre sculpture, a masterwork indeed.


But then what? I recall going a couple of years later after Fishknife to an exhibition of painting by McLean at the Greenwich theatre; these were bold and quick works, almost like sketches for an imagined performance. As the 80’s wore on McLean seemed to concentrate almost solely on painting, somewhere along the line he became Professor Bruce McLean but the sparkle of the early performance pieces seemed lacking.


In an audio commentary at Chelsea Space (which incidentally should be compulsory listening to all would be curators) McLean talks about “getting the nark” of after a point “not really being bothered”. Maybe it was the easy life of the Art Lecturer or maybe a sense that he had said what needed to be said and that repetition was pointless. Either way it is great to see the early works re-energsied and brought back to life at Chelsea Space. Go once, twice, maybe three times. There is also a nice little publication for £5 and a free poster.
Posted by Philip Sanderson at 5:19 pm 4 comments: 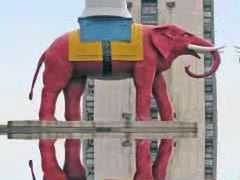 Only the mystically inclined would argue for an absolute correlation between sound and vision. There are those such as the Russian composer Alexander Scriabin who believed in a strict parallel between musical pitch and colour; with C being red, D yellow and so on. However in searching for new dialogues between picture and audio it soon becomes apparent that there is any number of ways of creating correspondence.

Moving images have been accompanied by music and sound almost from the start of cinema and the history of visual counterpoints to music is as old as that of dance. A lot of recent work in max/msp/jitter has focussed on gestural movement as a means of controlling synthesis. By using motion detection for example, the movement of a performers arm can trigger a sequence of notes or treat a sound in some way. Whilst this is all driven by a laudable attempt to bring some real-time interactivity to the performance of electronic music, such performed sound can often seem like amateur choreography or simply unwieldy instrument interfaces.

The motion detection abilities of max/msp/jitter can however be used to interact with movie files so that motion of the frames (either in or between) can trigger notes or samples. I have been experimenting with developing a proto app to do this (codename Instant Kitten after the Matching Mole song of the same name)and it is interesting how when using straightforward instrumentation the results are similar to those of a jazz/improv pianist. Here then is an example or study. Some images of the elephant and castle where sourced from the net, these were then cut together in an impromptu fashion. The resulting mov file was then fed into Instant Kitten, which supplied the “musical” accompaniment. To see some Instant Elephant look here here
Posted by Philip Sanderson at 4:57 pm 2 comments:

Piece of the Week - Tale Chase 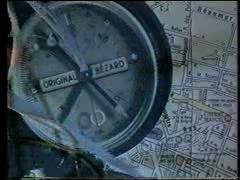 Rummaging through the archives looking for something (else) I stumbled acroos an old VHS of Tale Chase by Andrew Fitzpatrick. Andrew was a contemporary of Steven Ball and Michael Denton on the FVS course at Maidstone College of Art, which is how I got to meet him. Having previously recorded music for (and with) both Michael and Steven for various video projects Andrew who having successfully got a small grant asked me to produce a soundtrack for his video in about 1986.

Somewhat blind (having not seen the video footage) I produced three new tracks at IPS studios in Shepherds Bush for the project all using heavily treated acoustic guitar. However once we got together it soon became clear that these didn't really gel with the visuals and so I reworked some other material I already had, specifically a 'vibe' sequence originally written for Michael Denton's Watertight film and a percussive car track which combined a Led Zeppelin drum loop with Isle of Man TT race sounds.

Having not seen the piece for a few years what is interesting viewing it again is the way in which the video is edited (particularly in the second part) in an almost scratch style to the echoes and repeats in the music. The visual motifs of maps and compasses can also be found in many of Michael's videos from the period and indeed to some extent in Hangway Turning.
Posted by Philip Sanderson at 1:10 pm No comments: