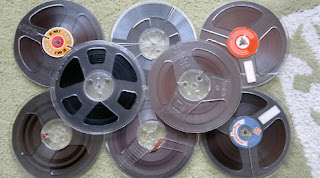 Any re-issue of an album from the 1960s or 70s will proclaim that it has been digitally re-mastered – the term (and indeed the prefix re- itself) implies both a return to and a revelation of something. There is an implication that through the process of digital re-mastering we might find again the elusive lost original. An original which existed at some point in the analogue past and in an analogue form. The digital promise is that through the act of transference from reel-to-reel tape to a string of bits we can travel back in time and our analogue original can be regained and preserved.

But did the analogue original ever truly exist or is it a mythical creation that haunts the re-mastering process always threatening to be revealed yet suitably unobtainable causing albums to be re-mastered not once but several times?

Let s don our white lab coats and take a look at the steps in digital re-mastering process. Firstly we must go to the vaults and take out the master tapes. The master tape would normally be large 10 inch ¼ inch reel to reel tapes recorded at 15 IPS (inches per second) and containing a two track recording. These recordings were usually mixed from (depending on the era) 4, 8, 16, 32, 64 and 128 multi-track tapes.

However there may well be more than one reel-to reel master. Until the late 1960s both a stereo and a mono master would be produced. The mono master would not simply be a mono mix-down of the stereo mix but a separate mix from the multi-track often with a quite different sound from its stereo counterpart. Whether stereo or mono a further reel-to-reel tape would be made from this ‘original’ master by the cutting room engineer as he adjusted EQ and levels in an effort to make the vinyl record sound as 'good' as possible. Cutting vinyl was (and is) something of an art and certain cutting engineers would be valued for their work in knowing just how much could be squeezed onto the disc. Porky’s Prime Cuts for example was the name given to work by the mastering engineer George "Porky" Peckham who was famed for cutting discs - for example Porky cut a number of the T.Rex hit singles of the 1970 such as Metal Guru (and indeed also the Table Matters EP by Storm Bugs).

So already the ‘original’ analogue master tape is becoming a shifting target. A digital transfer from the cutting engineer’s master might in theory sound more like the vinyl record but that then doesn’t take into account the degree to which a pressing can shape a sound. A cutting engineer may for example have boosted the treble in places (especially towards the middle of the record) which on the finished vinyl sounds fine but if transferred to digital would sound too bright and so on. Then there is the issue of hiss. Engineers in the pre-digital era spent considerable time trying to eliminate the background noise which any analogue system naturally produces. Digital technology has accustomed us to a hiss free soundscape and the advent of noise reduction hardware and plug-ins will tempt all but the most resolute to remove at least some of the hiss not to mention clicks, pops, crackle, hum and other analogue undesirables.

This all assumes that any version of the master tape is still in existence. Had the two track master been destroyed we could if we still had the multi-track tape mix the tracks once more. However a final mix down in the 1970s (before automated mixing desks began to appear) was often a very much an on the fly process with many hands on the mixing desk faders bringing different musical parts in and out as required throughout a song. Furthermore some effects such as echo and reverb might have been applied only at the mixing stage and so to recreate the sounds we would need to have the same effects units available and maybe in a similar way to the moving faders adjust them during the course of the mix. It soon becomes clear that replicating the original mix is going to be a far from easy task; we might approximate it but probably not reproduce it.

The re-mastering process then become not so much a one-off event as a series of séances in which the producer assisted by the latest algorithms and the finest new plug-ins attempts to make contact with the phantom original and call forth its presence - only for it to fleetingly appear before receding once more to the other side.
Posted by Philip Sanderson at 11:17 am No comments:

Can the hauntologogical be exorcised? 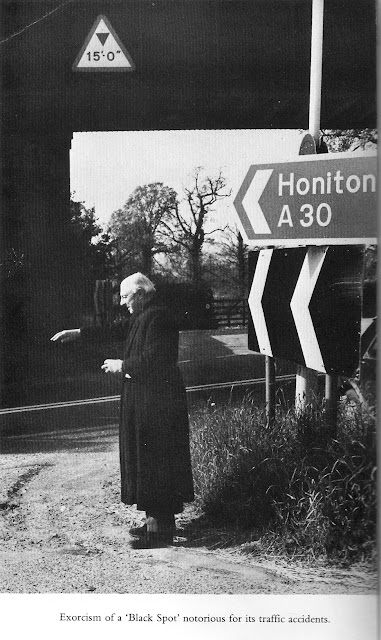 Adding colour by hand it was felt brought photos ‘to life’ though often as not the overall effect was often far from naturalistic or realistic and gave many pictures a somewhat other worldly quality. An analogy can be dawn with the clever handiwork performed in many an American funeral parlour whereby a sallow corpse is turned into a presenatable body an idealised frozen represntation to be viewed by the grieving relatives. In the case of the hand coloured photograph the tiny death (La petite mort) of the back and white image is replaced by a lifeless yet preserved colour image; set apart from the moment fixed (moment fixe). 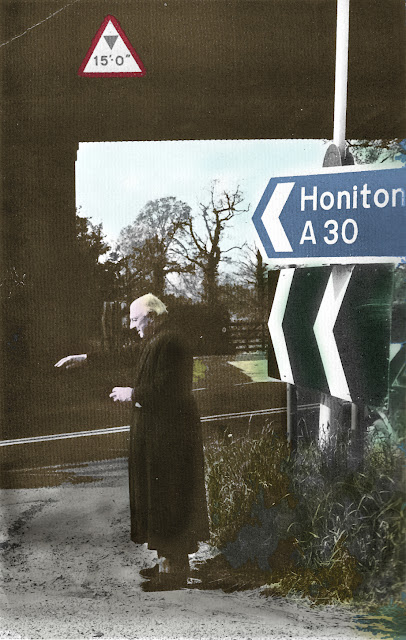 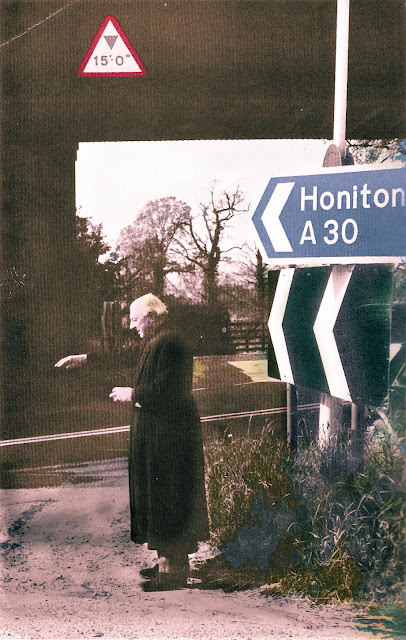 Posted by Philip Sanderson at 2:20 pm No comments:

Patinas of the Past

..arguably the boundaries between past and present are blurred such that there is an ongoing dialogue between the two. One might even imagine that the library and soundtrack music of the 1970s which so inspires the bands labelled as hauntological may not have been recorded in the past at all but could have been recorded now or indeed in the future and have simply seeped through the fluid pores of non linear temporality to physically manifest itself as piece of vinyl in the 1970s or as a download now or as who knows what at some future date.

Ah if only…..
‘Holding a battered copy of the Ziggy Stardust LP in one's hands, it can seem like a repository for nostalgic residues, as if the grooves in the vinyl were in some way the sculptured marks of time¹s passing.  Rather than let the sediments settle, the idea behind Suicide Suite was to create a means of once again setting in motion the sounds and images that have lain dormant since 1972.  Suicide Suite dose not aim to remix or add to the original but rather to create a ghostly twin; an echo of the LP that occupies a parallel but somewhat warped trajectory.‘

Through a Telephone Box Darkly
Posted by Philip Sanderson at 1:45 pm No comments: 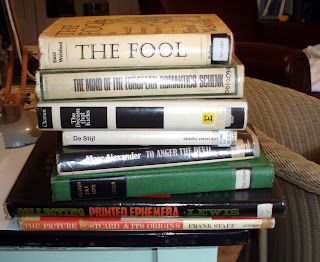 As part of the American Ground festival in Hastings the library had a sale on - you know the sort - the ones in which they get rid of lots of interesting books to make way for popular autobiographies. Anyway I'm not complaining as I picked up some rather fine titles at 40P each. It occurred to me that if in a year's time you were strapped for cash and could not afford the new £9,000 university fees you could do worse than read these titles from cover to cover (total cost £3.20). Mind you my education was a little like that... 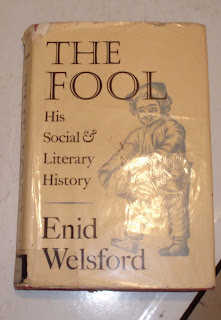 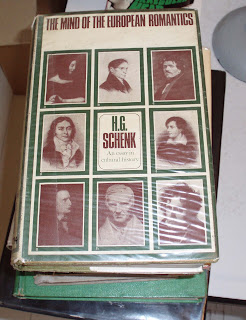 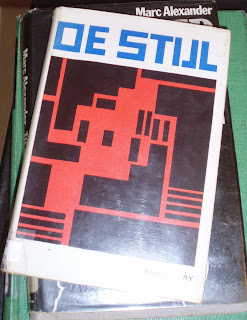 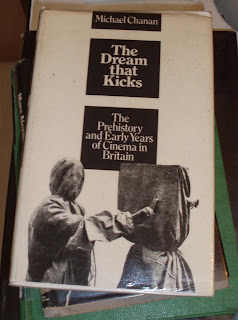 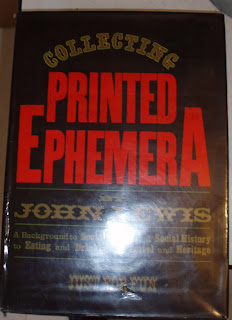 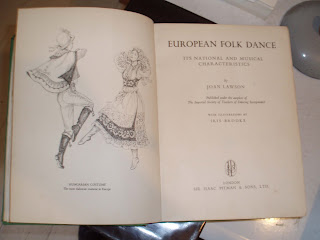 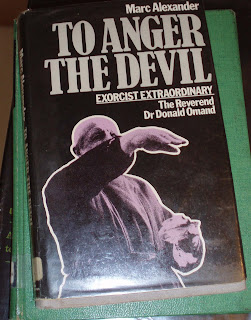 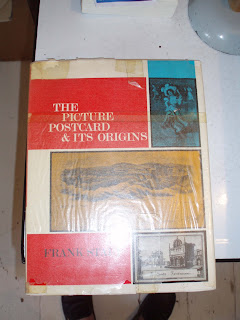 Posted by Philip Sanderson at 7:00 pm No comments: