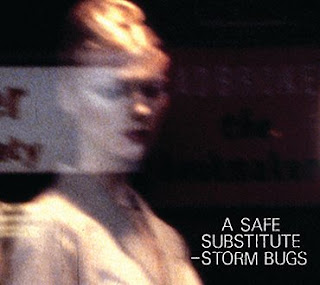 Continuing the 40th anniversary of all things Snatch Tapes out this week on Compact Disc is the Storm Bugs A Safe Substitute cassette from 1980. The release is on Klanggalerie re-uniting the Bugs with the label who released the Bugs are Back EP in 2002. Rather than hype up the release myself here are a few words on A Safe Substitute. Firstly from the much missed Mutant Sounds blog

"…this is everything a fan of left field D.I.Y. song structure perversion (U.K. stylee) could hope for. Much of what's heard on A Safe Substitute (fragments of which would re-appear elsewhere) were generated from that great old British analog beast, the VCS3 synthesizer, a machine used to more tonal ends by the likes of Franco Battiato and Pink Floyd and here providing swaying pendulums of corroded bloop, greyscale warble and hollowed out rhythms triggered from filter fucked arpeggiations, upon which they graft passages of alternately morose and plangent song structure fragmentation."

..and from the Idwal Fisher Blog

On “Hodge” a shortwave jamming signal is fed through the VCS3 with the LFO chopping up the remains. The result is a thudding beat in which radio waves float in and out of hearing range, the beat becoming louder as the signal fades “Blackheath Episodes” uses three synths to produce a rhythm track in which varies modes of the beat are tweaked whilst the two VCS's provide background drones. Over on side one is where we find the vocal treatments. On an eerie “Mesh of Wire'” vocals are fed through two reel to reels, with a background of plodding ritualistic thump. On “Objective'” the thump becomes a slowly sequenced funeral beat with the addition of a haunting cornet and a drifting voice extolling the virtues of beans. The hard to dislodge tape murk covers the whole release like a fine film of gauze but its not a distraction. Early 80s cassette releases will always carry with them the aura of lo-fidelity and as such this gives Substitute a patina of dirt that the passing thirty years has failed to shift. Wiping the muck of this release would be like polishing up and old master. It doesn’t really need it.

Accompanying the original recordings on the CD are three bonus tracks. The first is the soundtrack to the Table Matters film shot on Super 8 by Steven Ball in 1980. The CD sleeve images are all taken from the film which was recently transferred to digital and can be seen here.  The second bonus track is "333" an alternate version of "Nein Nein Nein" and lastly there is "He Rose up Again".

A Safe Substitute is available from all good outlets such as Rough Trade, etc.

Posted by Philip Sanderson at 12:35 pm