All of Marcel Duchamp's original readymades were lost during his travels from France to America and back. For the Galleria Schwarz exhibition in 1964 they were re-created in limited editions using the photographs that existed of them as guides. These then are the urinals, bicycle wheels, and snow shovels one sees in museum collections around the world, not readymades, but re-made readymades. But what are the issues surrounding this process of recreation, can indeed the readymade be re-made and still survive? 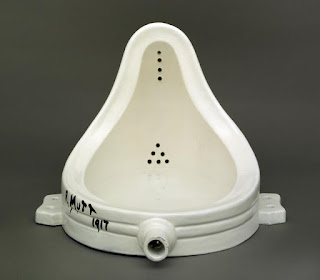 Duchamp always denied that his readymades had any intrinsic aesthetic qualities. The process of selecting (even if not for aesthetic reasons), and then reframing through the giving of a new thought is integral to the creation of the readymade. As readymade the object's original purpose no longer remains its primary raison d'êtrebut it cannot be said to disappear, it lies subdued in favour of the new thought. Exactly what that new thought might be in Duchamp’s readymades is unclear, it can be little more than the title, often a pun or word play. For example the snow shovel is called In Advance of the Broken Arm.

In the process of re-making the readymades as limited editions the marriage of thought and object was arguably reconfigured. The 'easy’ aesthetic of the original mass produced item becomes replaced by the weighted and purposeful hand crafting of the object. The object is now made from start to finish for the sole purpose of art. What was previously readymade then becomes prepared and full of intention, in short made, and something of a contradiction as the tension between thought and object is lost.

Duchamp was no doubt aware of this, but the desire to exhibit may have swayed his better judgement for the integrity of the readymade would arguably have been all the greater had they remained lost - À la recherche du readymades perduperhaps? However this simple act of remaking, this small slippage, for which many museums are now grateful, created a stress fracture that runs through much contemporary art in which the inclusion of seemingly readymade (but actually carefully handmade) elements is commonplace. 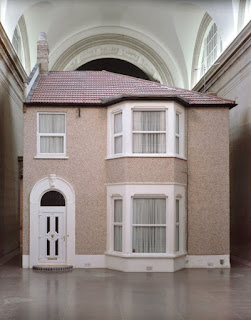 The new thought denies the object its original purpose, cloaking it and generating artistic purpose, but to an undefined end other than its own transubstantiation. This tension creates what can best be described as a void between the readymade and its new thought/title. The space has a conceptual air but must remain empty so as to keep thought and object juxtaposed for their mutual survival in the endeavour.

Jeff Koons, Damien Hirst, Michael Landy, Tracey Emin, Mona Hatoum - the list of artists employing handmade readymades is almost a who¹s who of contemporary art. Unintentionally Duchamp began a process whereby artists seek to invoke the spirit of the readymade but by recreating them loose the tension between thought and object.

Semi-Detached (2004) by Michael Landy is a case in point, A 1:1 replica of his parent’s house it is part of a poignant installation that focuses on his father’s life following an industrial accident. There is a pleasing juxtaposition between this replica of modest English vernacular architecture and the background of Tate Britain. Beyond the spectacle of the set design however there is no tension or space between thought and object. The space found in Duchamp’s original readymades is instead here filled with the pathos of the narrative of Landy’s father life. Similarly Tracey Emin’s My Bed(1998) becomes more memento mori or relic than readymade. Such practice perches precariously on the fault-line of Duchamp¹s slippage created by his remaking of the readymade.

Posted by Philip Sanderson at 10:48 am