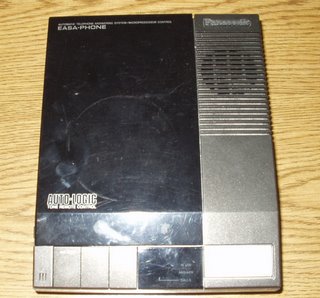 Before the advent of voice mail there was the cassette based answering machine. Clunky and unreliable the tape machine often unintentionally recorded people’s messages for posterity as the old message was only ever partly erased by the new. The result when played back on a regular cassette player is a collage of snippets of talk interspersed with clicks, beeps and random thuds.

On the night of Camerawork’s shredding show Gustav Metzger is my Dad our patron Gustav phoned in giving his apologies for not being at the private view and entreating us not to give out his address “even to his closest friend”. The message had such a nice ring to it (and as we were shredding everything else) we kept the tape. Listening to the recording some 8 years later one can hear not only Mr Metzger but a couple of messages later a disgruntled punter complaining about the show and then after a darkroom booking or two a member of staff discussing the shredding policy.

A new artform? Of course no surprise, there is already an LP of answer phone messages and a website or two. You can hear two or three minutes from the original Gustav tape here.
Posted by Philip Sanderson at 11:42 pm

I was waiting at the same bus stop as Gustav Metzger after visiting the dreaded Frieze Art Fair last year. He looked rather frail and was carrying a couple of shopping bags full of who knows what. He looked bemused and somewhat embarrassed when some hipster with a Hoxton fin took the time to big him up. Earlier I'd had to suffer eavesdropping Tracy Emin loudly telling Nicholas Serota that Rosalind Nashashibi should a future Turner Prize nominee. But Metzger seemed to inhabit an altogether different planet to the smarmy snarky art world hobnobbery.

Strangely I also saw Serota yesterday, at the 453 bus stop in Westminster, but I think he was trying to hail a cab, not slum it with the hoi polloi down to Mandela Way.

Yes Metzger seems one of those rare things a successful artist who is both humble and talented. I think before his rediscovery in the 90’s he had spent many a year in almost complete obscurity (at an unknown address somewhere in London). When curators first started asking him to take part in exhibitions and appear at conferences and the like I think he was rather bemused but thought why not. One of my regrets about the Camerawork project is that we were not able to pursue his ideas for a solo show in the space (as opposed to the shredding show for which he was an honorary/surrogate father).