The Snatch Tapes Website is Back - No No No No 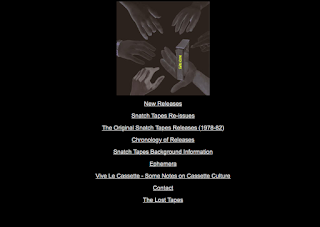 When the first Snatch Tapes website was put together in the early noughties it was largely historical focussing on the 1978-82 period and the first Snatch Tape releases. The number of re-issues and new releases since 2000 means that it was time for an update. So here it is with new 'useful' sections like a chronology of releases, but with the original DIY html style intact.

To coincide a couple of releases have had a wipe over with a damp cloth (as in a subtle remastering) and are now available on Bandcamp. Namely "Lay-By Lullaby", my year 2000 hom-age to the boys from Dusseldorf, and No No No No a back to basics one-take album from 2016.

Posted by Philip Sanderson at 10:38 am